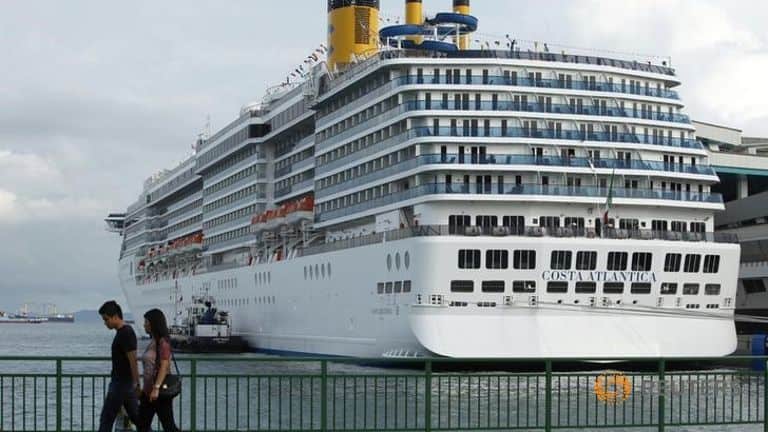 SINGAPORE: A brand-new billion dollar ship that has duty-free luxury shopping and 5-star dining and entertainment – a priority for its key clientele – now calls Tianjin, China home, and is Royal Caribbean’s sixth ship sailing from the mainland.

According to Royal Caribbean, Ovation of the Seas was built with the China market in mind. “It’s extremely important,” said Sean Treacy, Managing Director of Singapore and Southeast Asia at Royal Caribbean. “China is doubling this year with the arrival of this ship.”

“Asians are getting wealthier. If we look at China alone, at last count they had about 387 billionaires and more than 1,000,000 millionaires,” said Edie Rodriguez, President and CEO at Crystal Cruises.

While the cruise business in the West is growing in the low single digits, demand in China is surging. A total of one million mainlanders hit the high seas last year, and the Chinese Ministry of Tourism expects the number to more than quadruple by 2020.

China is now the industry’s fastest growing market, with package sales expected to hit $10 billion by 2018.

“They say China is obviously slowing down, but the Chinese are really not slowing down. There is a big difference,” said Amrita Banta, Managing Director at Agility Research. “All our research only points to the fact that the Chinese are going to be the biggest travellers. And they have enough money to spend.”

SOUTHEAST ASIA THE NEXT ‘CARIBBEAN OF THE EAST’?

According to the Cruise Lines International Association, passenger growth in Asia surged 24 per cent last year, with no signs of slowing down. A total of 52 cruise ships are operating in Asia this year, totalling more than 1,000 trips.

That adds up to a lot of passengers. In 2013, there were 1.5 million cruisers in Asia. Come 2020, that is expected to jump to 8 million. However, that is just a drop in the ocean because Asia is home to more than 3.5 billion people and some of the world’s fastest growing economies.

“Southeast Asia can be the next Caribbean of the East,” said Farriek Tawfik, the South East Asia Director at Princess Cruises. “We have 25,000 islands. We have all year round good weather and nice beaches. We have food and culture. The advantage is there.”

But in certain places, the potential is outstripped by a lack of infrastructure. A prime example is India, where its coastline stretches more than 7,500 km. Yet, the cruise industry has largely missed the boat there.

According to government figures, just 0.4 per cent of tourists in India opt for cruises. The reasons are multifold: Ports are old, immigration is slow and off-board activities are poorly organised.

In Mumbai, the plan is to convert the waterfront into a family-friendly playground, including a promenade, floating restaurant and Ferris wheel. It requires hundreds of millions of dollars in capital, but the payoff could be big. The World Trade Organization estimates that for every $15,000 India invests in the tourism sector, close to 90 jobs would be created.

“India obviously has a really rising population of the emerging affluent,” said Ms Banta. “Indians, with all their new governance and new PM on board, are looking to spend (and) go for luxury experiences.”

That will be more competition for the likes of Hong Kong, Singapore and China, which have all invested hundreds of millions of dollars to build new terminals in the past few years.

There is competition on another front too: Shipbuilding. This rivalry, however, pits East against West.

Wismar is a medieval town, located on the Baltic coast of northern Germany. It was a major trading center in the 14th and 15th centuries. The cobblestone streets and Brick Gothic buildings remain, as do fragments of the town’s shipbuilding history.

The shipbuilding industry has deep roots in Germany, although today it is a shadow of its former self.

“There has not been enough orders available that all the shipyards worldwide can survive so we have seen a downswing of the Germany shipbuilding industry in the past 40 years,” said Rudiger Pallentin, Managing Director at Lloyd Werft.

A few years ago, something changed: Asian holiday-makers discovered cruising and orders came crashing in. However, stiff competition looms from the East because China has singled out cruising and the building of cruise ships as one of the industries it wants to develop.

China is sinking billions into the industry. Ten new ports are under construction and the first Made-In-China cruise ship is expected to hit the water in 2020. It is part of a $4 billion joint venture between China State Shipbuilding, China Investment Corp and Carnival.

It is a start, but experts have said it could take decades – if not longer – for China to churn out ships completely on its own.

“The Japanese have tried. And I don’t think even they can do it on their own,” said Richard Clayton, Chief Maritime Analyst at IHS. “The Germans have huge expertise, as have the French and Italians. This isn’t the type of ship that you can take risks with because if you lose one for whatever reason, the reputation of that particular ship yard and the country will suffer significantly.”

As China’s shipbuilding ambitions grow, so do the number of Asian cruisers. Demand is so strong, cruise companies can’t order new ships fast enough. The order-book now sits at a record $42 billion.

Any company looking for a new ship has a 10-year wait ahead of them. “As you realise, business cannot wait, sit there and do nothing for 10 years,” said Lim Kok Thay, chairman of Genting Group, which is behind the Star Cruises, Crystal Cruises and Dream Cruises brands. “In our case, we went out and found a solution. And as I like to explain to people, if you can’t get the milk, you have to go out and get the cow.”

The company said these shipyards will give it a leg up against a fiercely competitive cruise industry in Asia because it will be free from both delivery timing and pricing uncertainties. It also means that Genting Hong Kong becomes the world’s first cruise ship owner to be building its own ships.

Ten ships are already on order: Two China-bound behemoths for Star Cruises and eight smaller vessels for its Crystal Brand.

Mr Lim said the firm did not turn to China for its shipbuilding needs, because it would have taken “too long”.

“China is in infancy where cruise ship building is concerned. They are very good in building all other ships, but they have yet to master the art of building a nice cruise ship. So we decided on Germany, where there is already the infrastructure and the financial support for building cruise ships,” he said.