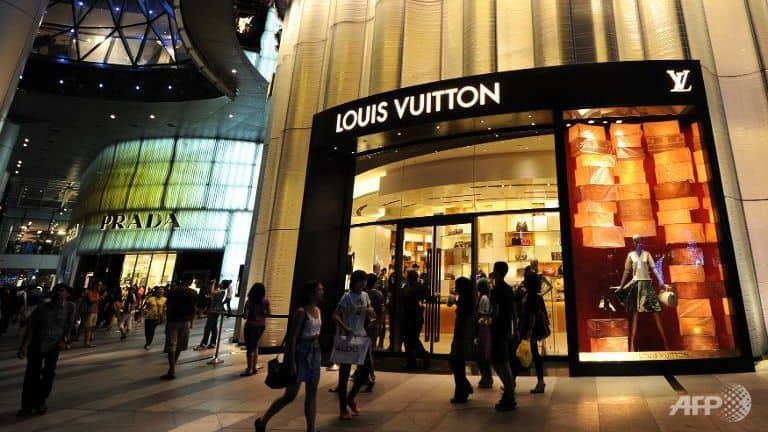 File photo of a luxury retail store in a shopping mall along Orchard Road in Singapore. (Photo: AFP/Roslan Rahman)

SINGAPORE: When it comes to making luxury purchases, Singaporeans are no longer drawn as much to the prestige and status that come with high-end brands. Instead, product performance and aesthetics are what fuel the appetite of local shoppers.

This is according to a new study conducted by Mediacorp and luxury market research firm Agility Research and Strategy, which found that only about one-third of affluent Singaporeans (38 per cent) felt that it was important for others to recognise the brands that they are using. An even lower percentage of respondents (31 per cent) said they like the idea of people knowing the luxury brands they buy.

The majority of the 1,000 affluent individuals – defined as Singaporeans and Permanent Residents who have a monthly household income of at least S$7,500 – place more emphasis on individual needs when deciding on a luxury purchase.

For example, slightly more than half surveyed (51 per cent) singled out aesthetics as the most important consideration for a luxury item, while 59 per cent said these products stand out for their higher quality.

Meanwhile, about seven in 10 respondents (73 per cent) indicated that they make luxury purchases based on what they like, regardless of what others think. Instead, recognition is only meaningful when it comes from people in the same social circles, according to the survey which was conducted from Nov 2015 to Jun 2016.

“It’s not that people don’t like luxury brands anymore. They still like them for the quality, exclusivity and how much they resonate with the brand.. but people think differently now,” she told Channel NewsAsia. “It’s not just about flashing a certain brand anymore; it’s more about liking luxury goods because you think it’s well-crafted, of good quality and you’re rewarding and pampering yourself with it.”

Amid a slowing economy, Singaporeans also seem to be placing more emphasis on quality buys.

“Another of our latest research findings showed that overall sentiment of Singaporeans is a bit cautious with the economy slowing over the past year. They are not spending less, but they are also not spending more on luxury items,” Ms Banta said. “We also know that a lot of Singaporeans buy when they travel or buy online now to get the best price.”

To be sure, there is still a certain segment of affluent Singaporeans that are more brand-conscious and are more likely to use luxury brands as a validation of their social standing, according to the report.

This sub-group – accounting for 33 per cent of the affluent Singaporeans surveyed and are made up mostly of younger respondents with higher incomes – prioritised immediate gratification over long-term wealth accumulation.

For instance, more than half (59 per cent) said it is important to them that people recognise the brands they are using. Similarly, 58 per cent noted that they grew up with luxury brands and half of the respondents indicated that they would increase their spending on high-end items next year.

But in general, the affluent in Singapore are making a shift away from conspicuous consumption and that is in line with the general trend across Asia, said Ms Banta.

“There’s been a general shift among affluent consumers across Asia Pacific over the past two to three years where we see people getting a little bit more interested in experiences, rather than just buying luxury goods,” Ms Banta said, citing another study conducted by the research house.

“In our most recent millionaire survey, we saw things like skiing in Japan and going on wine tours getting a lot of interest from Singaporeans. So there has been a shift over the last few years about money and wealth being spent in different ways, apart from just buying luxury goods.”

Compared to their Asian counterparts, Singaporeans are among those who place the least importance in prestige when making a luxury purchase.

“Japan is perhaps the market with a lower score than Singapore because they have been using premium and luxury goods for a long time. Japan is a more mature market,” Ms Banta said. “On the other side, we have China and India where luxury is still new to them. They like the fact that people know the brand they are using but even in China, this is changing and they are increasingly talking about quality and exclusivity as the reasons why they buy luxury now.”